Sharp Sharp: Beyond slang to social cohesion among youth

Slang is widely viewed in pejorative manner, as substandard expression yet this genre of expression is used by different groups in different societies, each group creating its own register of slangs and their meanings. Traditionally, slangs are jargons restricted to the context they were used; however, it is not unusual for some slangs to defy the boundary of their original coinage and adoption, enter mainstream oral use and become popular. Sharp Sharp is a traditionally black urban male South African slang that is now popular and frequently used by almost all racial and linguistic orientations in the country. This study examines the place of Sharp Sharp in the South African society and its potential as a strategic communication expression for social cohesion; a conceptual approach was used to provide perspective to slang within which Sharp Sharp was situated and examined. The study is executed using a combination of observation of the slang in use and a literature study was done to aggregate knowledge on language and slang interaction especially the place of slang as an oral tradition. It was found that contemporary thought frowns at labelling slang in the classical derogatory perspective but, instead, argues that slangs serve functional purposes. 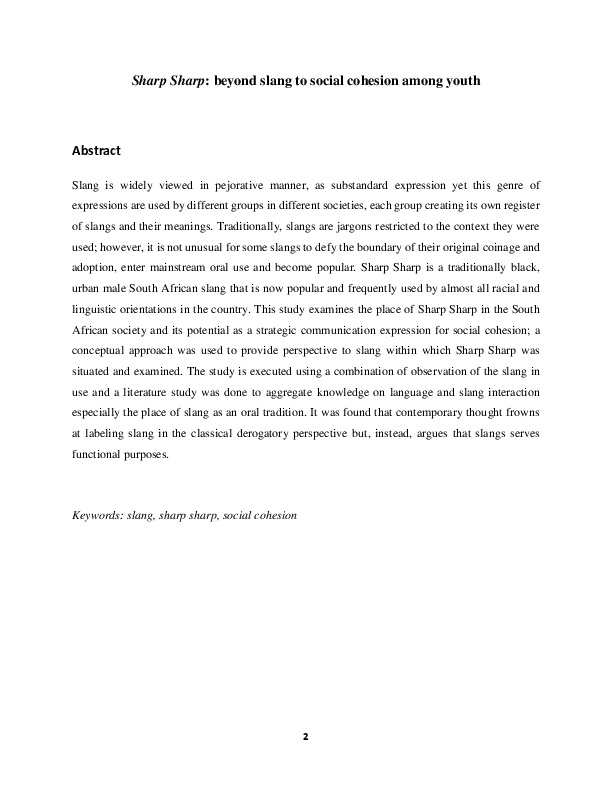