The violent conflict in Yemen, now in its seventh year, is characterised by the complex interplay of regional, national, separatist, extremist, and more localised tribal, religious, community conflict structures. While all levels of conflict translate to manifestations at local level, it is in particular the general fallout of war in form of the deterioration of basic services, the scarcity of economic opportunities (incl. the interruption of government salaries and stalling of investments) and resources as well as the breaking down of traditional conflict resolution mechanisms that drive conflict in districts and municipalities across the country. The consequences for the civilian population are shocking. Millions of people have no or only limited access to drinking water, sanitation and health care. As a result, 21 million people – 66% of the population – are in need of humanitarian assistance and protection.  About 4 million people are estimated to have been displaced by the conflict.

Further exacerbating fragmentation and competition between different groups of society, the demise of the Yemeni Rial and serious fuel shortages have driven prices up, endangering food security for several million Yemenis; many health facilities, water and sanitation systems and other critical infrastructure have been destroyed or have broken down; and over 70% of the population can be expected to have experienced violence and losses causing severe traumatisation, made worse by a lack of knowledge on or access to psychosocial support offers. Particularly socially disadvantaged groups, such as people with disabilities or the Al Muhamasheen minority, are increasingly vulnerable to the brunt of the war. Women and girls are highly affected by domestic violence, and are very often excluded from income opportunities and decision-making processes. These issues are compounded by weakened capacities of civil society networks, local unions, women’s councils, and youth forums.

The “Strengthening Resilience and Participation at Local Level in Yemen” (SRPL) programme aims to make contributions to enhancing the resilience of local institutions and vulnerable population groups. The target group is the vulnerable population in selected districts of the three governorates Ibb, Dhamar and Hadhramaut. Owing to the situation in Yemen, about 80 % of the Yemeni population is assessed as vulnerable. Of these, the most severely affected are children, young people, women, single heads of households, persons with disabilities, former war combatants, former child soldiers and the Al-Muhamasheen ethnic minority.

The programme aims to contribute to structural development at governorate, district and local level in the context of the ongoing crisis in Yemen by helping to enhance different dimensions of resilience (stabilisation, adaptation and transformation capacity) in institutions, communities and individuals.

As a programme under the Transitional Development Assistance (TDA) instrument of the German government, SRPL works multi-sectorally in the fields of :

(I) upgrading the provision of basic services,

Particularly in a socially and politically fragmented and fragile context such as Yemen, supporting local populations in working towards a more socially cohesive – and, by extension, more peaceful – society is of particular relevance to safeguarding developmental achievements. This has also been recognised by the German Federal Ministry for Economic Cooperation and Development (BMZ), having declared “peaceful and inclusive communities” one of four core activity areas for its Transitional Development Assistance instrument; and “peace and social cohesion” as Core Theme 1 of its large-scale reform process ‘BMZ 2030’. Moreover, working to strengthen social cohesion through development cooperation addresses needs beyond the so-called “silos” of international cooperation, and hence delivers as a Humanitarian-Development-Peace (HDP) nexus-approach.

GIZ is operating in Yemen in this important field of work under difficult conditions. Locally, ‘peace’ is politically charged word, and social cohesion work is often scrutinised or de-prioritised amid widespread poor basic service coverage. Additionally, the managerial and administrative capacities of many civil society organisations are weak, and they have limited autonomy operating under partially restrictive political frameworks. Under these conditions, it is particularly important for the SRPL programme to closely monitor potential unintended impacts of interventions. These challenges must be taken into account in context-sensitive work aimed at fostering social cohesion.

In implementation, the SRPL programme applies the framework on social cohesion provided by its commissioning party BMZ:

Social cohesion is characterised by close social relations between and within groups (horizontal), a sense of belonging to the community, a strong focus on the common good as well as legitimate and positive state-society relations (vertical). Social cohesion strengthens the resilience of groups to the escalation of violent conflicts while also reducing violence and promoting reconciliation. Social cohesion between groups is reflected in patterns of behaviour, attitudes and social norms in the dimensions of trust, a sense of belonging, willingness to participate and acceptance of diversity.

SRPL aims to mainstream elements of social cohesion work in the target governorates through all its components’ respective approaches. Given the multi-sectoral design of the TDA programme, the problem of social fragmentation is tackled both directly (addressing the core dimensions of social cohesion) and indirectly (addressing its enabling elements, by improving living conditions for targeted communities) through all outputs. Moreover, the programme connects to and complements activities undertaken in other projects within the GIZ Yemen portfolio.

Where it can leverage change locally, the SRPL programme tackles critical basic and peace needs at the governorate, district and sub-district level. As a TDA-programme, SRPL aims to contribute to structural development by helping to enhance different dimensions of resilience (stabilisation, adaptation and transformation capacity) in institutions, communities and individuals. At its core stands the implementation of participatory and demand-oriented small-scale measures in consideration of Do-No-Harm principles, which are subsidised by the programme for the rehabilitation of social and productive basic infrastructure in various sectors.

To achieve these, SRPL offers trainings to selected local civil society organisations to strengthen their capacities in methods of conflict management/resolution, violence prevention (particularly in youth), and psychosocial support (PSS) for people suffering from severe mental stress and traumatisation. Additionally, the project enables them to design and implement impactful small-scale measures through capacity development in project planning, steering and management (incl. commercial/administrative aspects) as well as on backstopping, monitoring and evaluation systems.

As social fragmentation festers, in particular, where access to basic social services as well as income and food security are at risk, the programme also supports measures that tackle challenges for vulnerable households in regard to water, sanitation and hygiene (WASH), agriculture, artisanal fishing, and basic (social) infrastructure. Initiatives are designed participatorily with all groups within affected communities and are implemented collaboratively to achieve positive living conditions for all (see example below).

Inclusive water network expansion: improving social relations, access to education
For many Yemeni communities, the war has led to increased displacement, exclusion from basic services and resource scarcity leading to conflicts over what is available. For Al-Mujadar and Hayat Al-Yahoudi, two villages situated in rural Far’ Al Odayn district of Ibb governorate, water supply was cut off at the last water network connection point about 7 km away in another village. Fetching water required travelling long distances in a rough and mountainous terrain, and fuelled conflict between communities and the local authority; as well as kept children – especially girls –from going to school as they are often sent for water runs while their parents work.

The SRPL programme facilitated participatory community development planning, which identified the need in the villages. With support from SRPL, members of affected communities jointly installed the water pipes connecting their communities to the existing network (see picture below). The villagers expressed appreciation for the socially cooperative manner of the conducted activity, and one member stated:

“We and our children were exhausted from collecting water from so far away. Now, water supply is very near to our houses. Our daughters now have the opportunity to go back to schools.“

Additionally, SRPL supports a joint project between three GIZ Yemen projects and Seton Hall University’s Centre for Peace and Conflict Studies (CPCS), which aims to enhance the understanding of conflict-economy relationships in selected governorates, and through dialogue and Economic Development and Social Cooperation (EDSC) planning to increase the capacity for functional markets that serve all Yemenis.

Through the project, selected local partner organisations will receive capacity development training on how to facilitate EDSC partnerships and inclusive planning processes. In addition, capacity building will also be provided for local leaders (tribal, economic, civil society, local government officials) in order to facilitate the planning processes. Small-scale economic development actions developed in planning at the district level will seek to complement and synergise with community initiatives developed and implemented in the SRPL programme. In particular through subsequent sub-national roundtables on economic issues that tie into the conflict, stronger social networks among economic and conflict actors can be built. 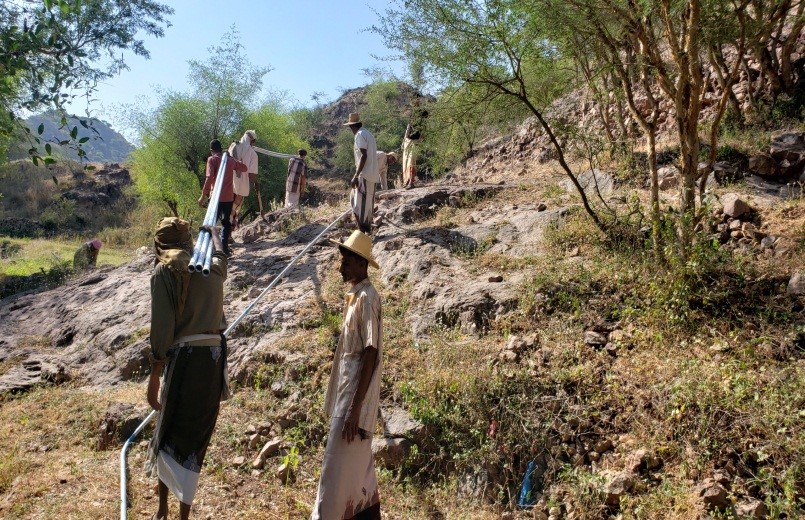 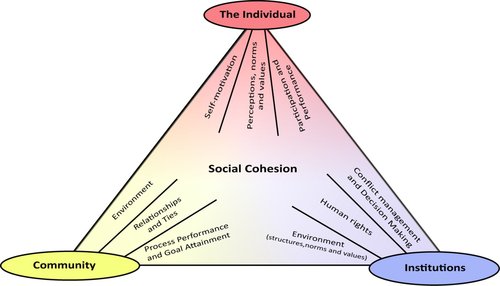 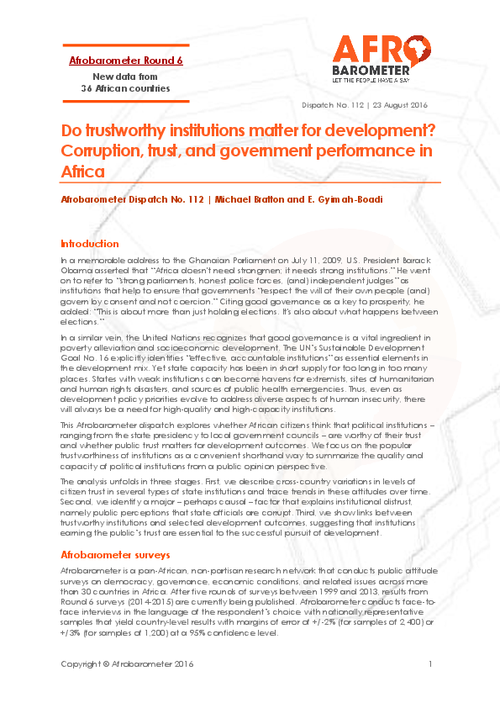 Do trustworthy institutions matter for development? Corruption, trust, and government performance in Africa